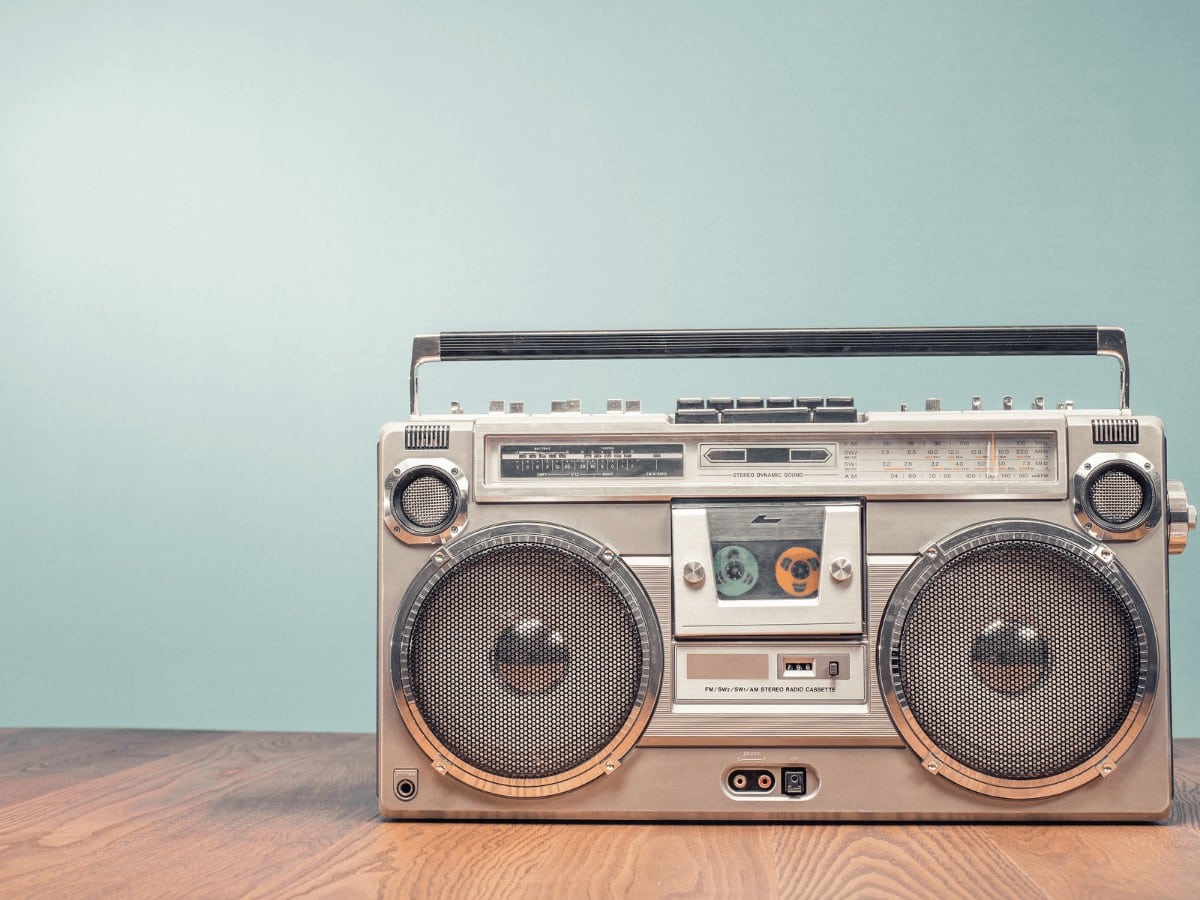 The 1990s was responsible for some of the most profound changes in technology, business, and entertainment that have all played an intrinsic part in how advanced we are today.

It witnessed the birth of the world wide web, smartphones, digital cameras, the introduction of quirky fashion trends, and the rise of hugely popular shows such as Friends and The Fresh Prince of Bel-Air. However, it is also known for something nostalgically beautiful: the love song.

Let the Music Do the Talking

As difficult as it may be for some of us to verbally express our emotions to someone special in our life, 90s love songs do the talking for you.

Instead of putting your favorite playlist together on a cassette for your better half as we did back in the day, these days, we have an option to produce one on our preferred music streaming service digitally.

Mood lighting, fine wine, nibbles, and a playlist equals the best romantic date night, and the excellent 90s love songs to choose from help you achieve that.

The Impact of 90S Love Songs

Boyz II Men’s “I’ll Make Love To You” brings out the sexy, sultry, and seductive side of you, while Brownstone’s “If You Love Me” reminds you of your inner power by pleading that if someone declares their love for you, then actions must speak louder than words.

Aerosmith’s “I Don’t Want To Miss A Thing” and Shania Twain’s “From This Moment On” express how much one is willing to sacrifice every moment alone and instead spend it in the arms of their love.

There is no accident in the choices and how they bring out your emotions regarding the hits on this list.

They include the feeling of never being so much in love before (Faith Evans “Love Like This”) and feeling torn to pieces when the person you love passes away (Toni Braxton’s “Un-Break My Heart”).

Vowing to commit to doing everything for you through the eyes of love (Bryan Adams’ “(Everything I Do) I Do It For You,” and every topic in between.

The variety of music in this blissful decade was second to none, with the likes of East and West Coast Rap, bouncy hip hop and R&B, power ballads, and not forgetting the influx of girl and boy bands that smashed onto the scene.

Though some 90s love songs may feel as prehistoric as the Walkman or tape deck, many are still frequently played on radio stations worldwide and featured in playlists on Apple and Spotify.

Whether you’re finding songs for a romantic night in, going on a long drive and want the sentimental side to come out of you, or you want to relive those nostalgic moments that life had to offer, keep reading to find out the best 90s love songs that cover all genres.

This tender-loving emotional hit sold a whopping 12 million copies, sky-rocketing its way to number one. If that wasn’t enough, it was replaced by another one of their exquisite ballads, “On Bended Knee,” off of their album “II,” which was the third best-selling album in 1995.

Known for their acapella harmonies and silk-like individual voices – most notably Wayná Morris’ – Boyz II Men put a firm stamp on being one of the most respectable R&B groups of the 90s.

Out of all the breakup songs ever written, there’s a question whether any come close to the utterly raw, vulnerable, and wounded vocals that Sinead graced us with on the 90s hit “Nothing Compares 2 U”.

Prince originally wrote the song, and although he is arguably one of life‘s musical geniuses, Sinead made this her own, and it still hits you right in the solar plexus now as much as it did over 30 years ago when it was released.

Most popularly known for its appearance in the 1998 Blockbuster movie “Armageddon,” Steven Tyler’s eccentric rock vocals and the magnificent orchestral arrangement turned this hit into a 90s power ballad packed full of grit and emotion that went hand-in-hand with the movie’s storyline.

If this doesn’t get your head bopping, I don’t know what will.

Written around a loop sampled from the song “Chic Cheer” by American band Chic, “Love Like This” peaked at number 7 on the US Billboard Hot 100 in 1998.

Evans uses her soulful vocal range to hit high notes filled with passion as she declares to have never loved like this before and is on cloud nine because as such.

This 90s love song has a slap and a pop to it that will never lose its impact, even if it was nearly released 25 years ago.

Featured in the 1992 classic, “The Bodyguard,” “I Will Always Love You” was originally written and recorded in 1973 by one of America’s best, Dolly Parton.

Whitney’s rendition of this masterpiece managed to top the US Billboard Hot 100 for some fourteen weeks straight, which is no surprise as everyone who listens to this love ballad can feel the passion, energy, and love pouring through Whitney’s heart and soul in every lyric.

Written by Diane Warren, an acclaimed songwriter of the 90s, there is pain and longing in this love song as it explains the emotions one experiences when someone passes away who they loved.

This smash-hit sold over 10 million copies worldwide, with nearly 3 million alone in the United States, making it one of the best-selling singles of all time.

This 1996 classic was part of the “Batman Forever” soundtrack and turned out to be a gigantic hit, so much so by winning awards for Song of the Year, Record of the Year, and Best Male Pop Vocal Performance at the 1996 Grammy Awards.

Released in 1998 off her third studio album, “Come On Over,” Canadian singer Shania Twain decided to put pen to paper and write this lyrically perfect tear-jerker of a love song during a soccer game in Italy.

The song is gorgeous, and together with Twain’s astonishingly beautiful voice, it is enough to put a lump in your throat.

Released in 1994, this was Brownstone’s biggest hit topping the New Zealand charts for five weeks straight.

All three group members offer a blend of authentic, soulful voices and showcase their harmonies alongside a solid R&B background beat, making the song a great mood-lifting yet passionately artistic piece of music.

If you’ve ever dreamed about finding your ideal person and your wish came true, then K-Ci and Jo-Jo’s R&B ballad, “All My Life,” notes this experience perfectly.

This slow love song shows how vocally talented the duo are, yet they were very close to handing it over to another artist. Thankfully they decided to stick with it and produce a track that melts the heart effortlessly.

This 1991 classic was the soundtrack from the movie “Robin Hood: Prince of Thieves.”

The track starts slowly and builds up into an iconic power ballad, like an explosion of passion combined with Adam’s raspy voice.

Lyrically, nothing is confusing about this hit. It describes the outright love someone has for their partner and that everything they do, is all towards the greater good of the relationship.

“Emotions” details how love can make the intensity of your feelings grow, positively and negatively, and combined with a joyous tone set throughout the track from start to finish, it is up there with some of the best love songs Carey has released.

Van Morrison was the original maestro behind this masterpiece; however, Rod Stewart turned his 1993 cover into a slow rock love song made masterful by the delicate raspiness in his voice that is accountable for how the track can open up your heart.

Most people will be familiar with Justin Timberlake’s music, yet he was part of N*Synch and carried this song with his remarkable vocals before his solo career took off.

However, Richard Marx was the brains behind this hit, having written and produced it, so it would always be a beautiful love song. He released the certified platinum-selling hit “Right Here Waiting,” which topped the charts in many countries.

This song represents how much more impactful and significant actions are instead of just standing by the words “I love you.”

It is an unbelievably touching masterpiece with only two voices and an acoustic guitar and is known as one of the greatest acoustic love ballads ever made to his day.

This post was produced by Savoteur and syndicated by Wealth of Geeks.