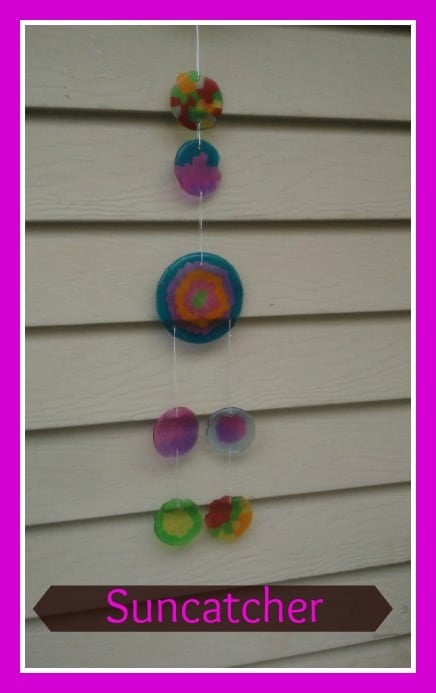 Today I’m giving the blog over to Erica of We Three Crabs.  She is going to share how to make a sun catcher! 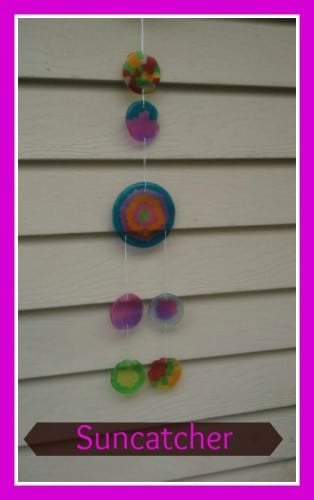 How to Make a Sun Catcher

Today I made a sun catcher by melting pony beads. This project is inexpensive and easy. I bought a small bag of Pony beads from the craft isle at Wal-Mart for $2.50. 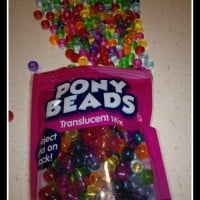 I preheated my oven to 425 degrees. I got my muffin tin out and an aluminum pan that had a pot pie in it at one time. These were the sizes I wanted to start with. I was a little nervous to use my muffin tin, but as the sun catchers cool they release themselves. I spread out the beads and used colors that I liked together.

Once you get your beads in a single layer, put them in the oven for 20 minutes. I took mine outside to my deck to cool when they were done. As they were cooling I heard them pop. I realized they were releasing from the pans. They came right out.

I used a drill to drill a couple of holes. I then used dental floss to tie them together. I have these hanging by my back door. They would look cute on your front porch or in your garden.

So for under $3 this is how to make sun catchers, and I have a new decoration! What a fun thing to do with the kids. Just be careful with the hot oven.

Erica is the mom to a toddler boy and a wife of an Alaskan fisherman. She blogs about Life, Love and adventure over at We Three Crabs.