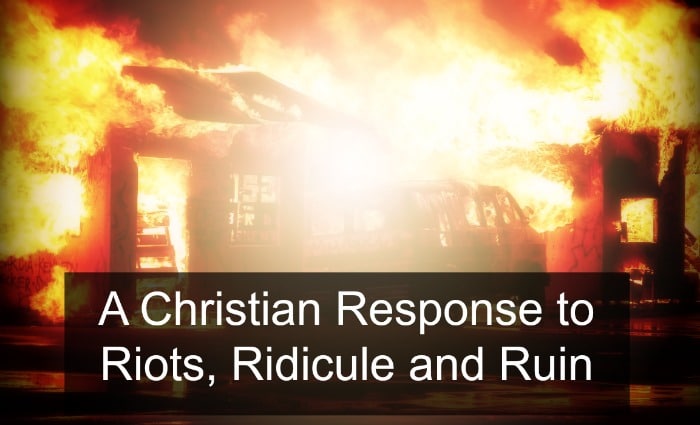 We’re brothers and sisters, we share the same blood, and the same heavenly father, and we are all made in his image. In the midst of the riots, ridicule, and ruin of recent days, how should we as Christians respond?

Riots: Some supporters of Mrs. Clinton are scared and upset by the way America’s recent election ended. They are out on the streets, exhibiting their fear by protesting, rioting, and causing physical and property harm to others.

Ridicule: The election of Mr. Trump has brought out the basest of personalities in some of his supporters. American citizens with foreign looks or obviously belonging to the muslim religion are being treated shamefully. Women have been groped by men of the baser sort, and property is also being damaged by hate signs.

Ruin: The condition our hearts are in, is reflected in the culture around us. Without the redeeming blood of the Lord Jesus Christ, evil abounds and grows. 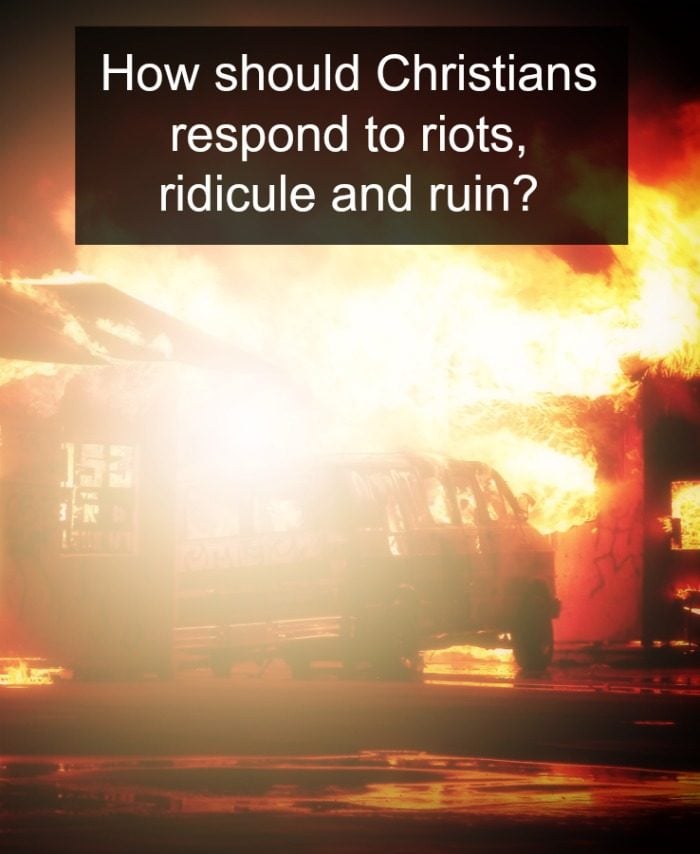 A Christian’s Response to Riots, Ridicule, and Ruin

First of all, I think of 1 Peter 2. I would highly recommend you read the entire chapter. It is so good and so relevant even today.

The first verse commands us to lay aside all malice, guile, hypocrisies, envy, and evil speakings. That last I’ve always struggled with, it’s one thing to speak the truth in love, but all too often we are speaking unkind and evil thoughts towards our fellow man.

[bctt tweet=” If we are called out of the darkness into the light, our deeds should no longer reflect the actions of the darkness. ” username=”aproverbs31wife”]

How do our actions line up with our beliefs? Are we kind? Are we true? Do we show honor and respect to all men? Jesus was not a respecter of persons, yet too many times we hold back and hesitate to reach out to others because they don’t quite hold up to our standards.

This brings me to verse 17. Honour all men. Love the brotherhood. Fear God. Honour the king.

The king during that time it would seem, persecuted Christians, and several other verses in this chapter touch on suffering wrongfully and how God sees it.

Verses 19 and 20:  For this is thankworthy, if a man for conscience toward God endure grief, suffering wrongfully. For what glory is it, if, when ye be buffeted for your faults, ye shall take it patiently? but if, when ye do well and suffer for it, ye take it patiently, this is acceptable with God.

Jesus, being God, took on our human form and dignified it. For this reason, all men should receive honor as the image bearers of God.

The final verses 23-25 clarify that Jesus did not seek revenge, he did not attempt to justify himself, but rather committed himself to his father who judges righteously. He took our sins, healed us by his stripes, and gathered us into his fold so that we would reflect him in our actions and live righteously, dead to sin.

So what would this look like in practical everyday living? When confronted with riots, ridicule, and ruin how should a follower of Christ respond?

[bctt tweet=”When confronted with riots, ridicule and ruin how should a follower of Christ respond?” username=”aproverbs31wife”]

Our response should be meekness. When the ridicule is directed towards us, Proverbs 15:1 states clearly that a meek answer turns away wrath (anger). So we must reflect the meek lamb of God when ridicule is directed at us, and commit ourselves to our righteous heavenly father.

How should we respond when we see another receiving ridicule? I’ve thought about this one for a while… Pretty clearly we are to love and honor all men, and standing aside while another is harmed is not honorable.

But the real question is this, am I willing to stand in the gap? When I see a fellow human being treated wrong, am I willing to meekly stand by their side and take their ridicule upon myself? This is exactly what Jesus did for us, and as His reflections, we should be willing to do the same thing.

[bctt tweet=”When I see a fellow human being treated wrong, am I willing to stand by their side and take their ridicule upon myself?” username=”aproverbs31wife”]

Even when the person being treated wrong, is part of the LGBT community, will I stand in and take their ridicule? When that person is a different color than I am, will I use my voice (meekly of course!) to fill the gap? When that person is of a different religion, perhaps a religion that would happily convert or destroy me and my fellow Christians, will I still stand with them against the hate directed towards them?

He stood with us all, he took all our black sins, He filled the gap between our sins and God. He took the ridicule that satan desired to place on us.

It is my prayer, that I would willingly stand in the gap for others. When I see wrongs happening, it is my prayer that God will direct me and give me the strength to stand in for even those I disagree with.

People are scared and hurting. We don’t have to agree with who they have chosen to be, but as Christians, our duties are pretty clear. In the face of riots, ridicule, and ruin we are still to honor all men.

In the end, the man elected as president does not add or take away from our value as humans. He does not make or break any person or person groups, only we can do that and I pray that we build up and not tear down.