Do you ever hear stories of those who are out serving the Lord in some great way, and you wonder to yourself, “Where is My Ministry“? 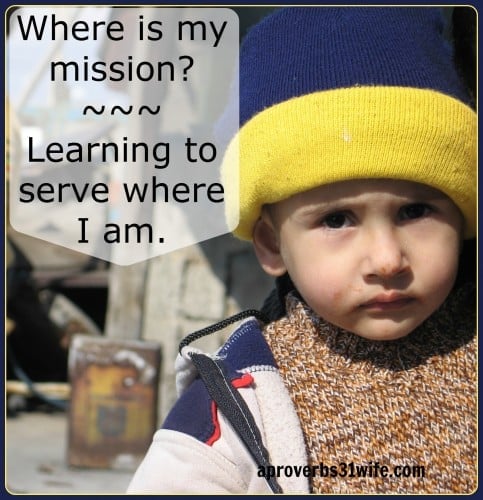 When I was in my early teens we watched an IMAX show on Helicopters; there was a 5 minute segment that showed rescue workers unloading bags of rice and other foods for a poor country in Africa. I remember crying that night when I was in bed. I felt so bad for the people that were thrilled to receive the food. In my heart I knew I was supposed to go and make a difference.

However, when I was in my teens, mission trips were not a possibility. The church group we were a part of at that time did not believe in sending missionaries over-seas. I could share where the idea came from, but it’s irrelevant. However, I struggled with that, I wanted to do something big for the Lord, I wanted to serve him. I remember praying and asking God, “where is my ministry, how can I make a difference in this world?”

It took awhile for me to hear what God was telling me.  I had my heart set on going out there and doing something big. I wanted to make a splash for God. But all the while he was calling me to my own ministry at home. I had an ill mother and 5 younger siblings. The two youngest relied a lot on me to care for them. My ministry as a teen was at home, caring for my little bothers and teaching them. The night KH asked why I was on my knees, and then asked to pray with me, was a touching moment.

So as a teen I had discovered my ministry. Then I got married and moved out to start a new family. The idea of ministry had faded in my mind. No longer was I thinking big for God, I was thinking on how to be the best wife I could be to Jason.  Life moves on, sometimes you move towards God, and sometimes you move away, in my case, I moved away.

At some point in me trying to be the best wife I could be, I realized that without God, I was going to fail. Even with him I still fail at times. Praise the Lord for his grace and forgiveness!  And in coming back to the Lord, putting my focus back on him, my dream of doing great things for the Lord was rekindled.

Again, my heart would throb at the idea of going to Haiti or the DR, I would dream of going out there and just doing something big for God.

Funny thing is, I often have to re-learn stuff. Because, again God had to show me that my mission for now, is right where I am.  God doesn’t always want us to “do”, sometimes he just wants us to “be”.  Wherever we are at the moment, is very likely exactly where God has placed us, and if he has placed us there, that’s where he wants us to be.

So where am I now? Where is my ministry?  It’s in being. Being a Godly wife to Jason. Being a daughter, and sister. Being a friend to my neighbor, who does not know the Lord.

It’s in being here, on this blog. I know I’ve said it before; but my reasons for starting this site, were purely selfish. You can make an income blogging; it takes hard work and dedication, and even now, a year later, I still see very little back from it.  But, God put me here and even though my primary reason was selfish, he took my work and began using it for his ultimate glory.

Sometimes, I wonder if our (my) desire to get out there and do something big, has more to do with pride than than any-thing else. Maybe it’s that desire to be recognized as some-one who does great things for God.  Maybe, I am discontent with being the little guy, the one who no one knows about.

“He who is least will become the greatest”.  No matter what we are doing, no matter how small it may seem, we are glorifying God.

There is a sister in our church who’s kids are all grown, and it would seem like her mission as a mother is over. But her mission for God is far from over.  If I need to know something, chances are if I call her, she will have the answer.  I am always hearing about things she has done to bless others. Most recently I heard of how she does the ironing for a family of 6. What a blessing she is! But you will never hear any of this from her, she simply and quietly does what God has called her to do.

So my lesson has been; no matter where I am, if I allow God to work in my life, I can make a difference for others.  No longer am I asking where is my ministry? I am asking God to show me needs that I can fill right here, right now.