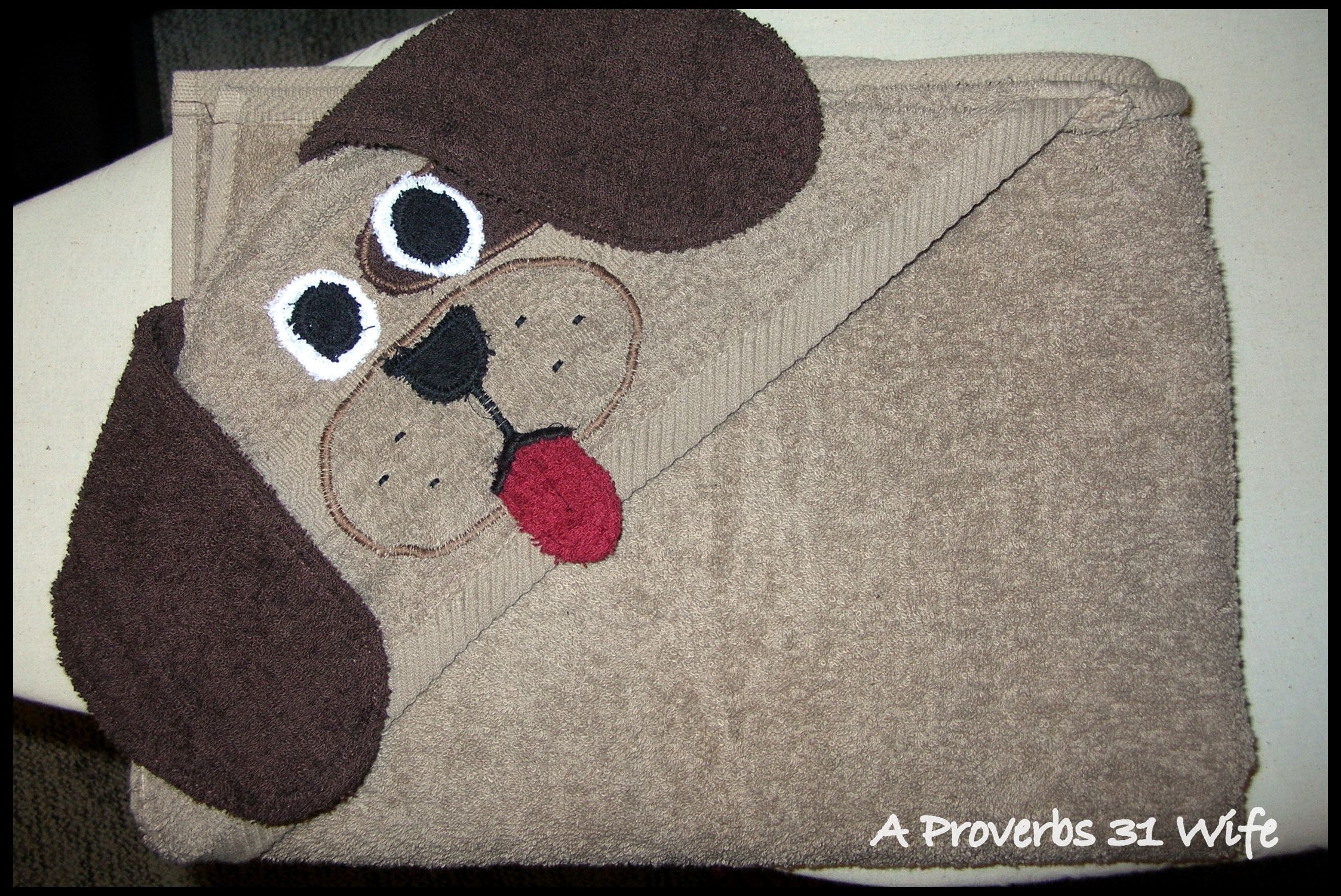 A dear friend of mine is adopting a newborn baby boy and words cannot express how excited I am for her and her husband!   They have a little 31/2 yr old boy that they are in the process of adopting also.    When I heard the church family was  having  a baby shower for them  I immediately decided I wanted to make something for both boys.  Big brother, little brother style.

The first thing I needed to do was make a trip to the store. Here is what I bought. 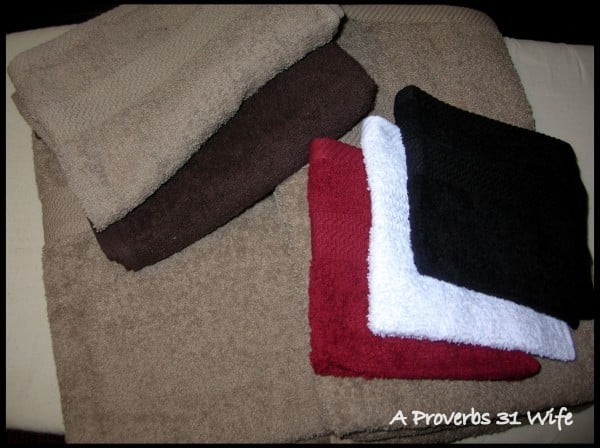 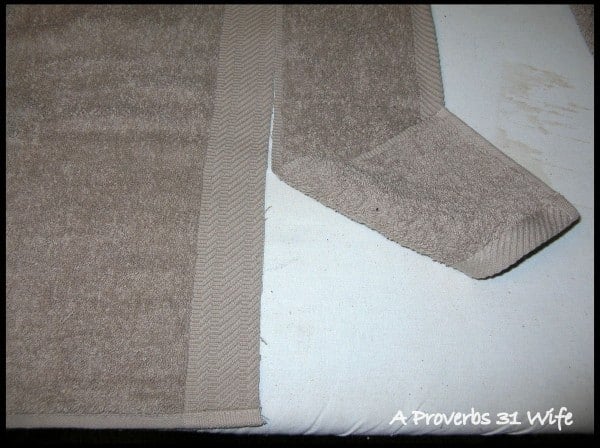 I started by making baby’s towel.  I took the first bath towel and cut off the ends as shown. 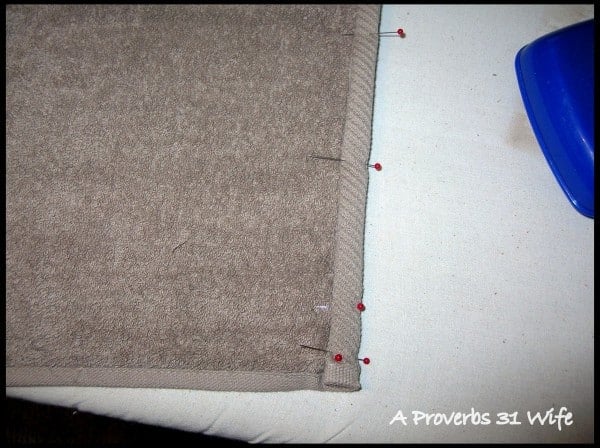 Then I rolled and pinned the end, then stitched it. Basically I just shortened the towel a little bit. 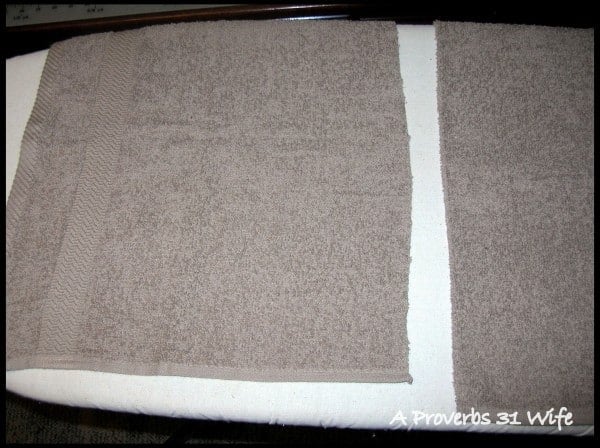 Next I took the tan  hand towel and cut it in half, so I had 2 nearly square pieces. 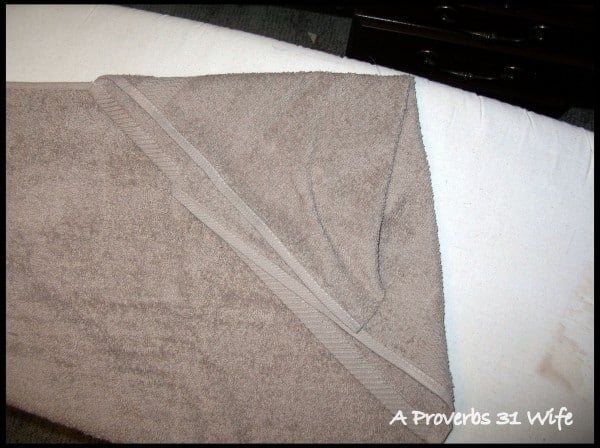 I took one half and used it to make a triangle across one corner of the towel. Then I cut off the extra that is shown folded in, so I just had a triangle piece. 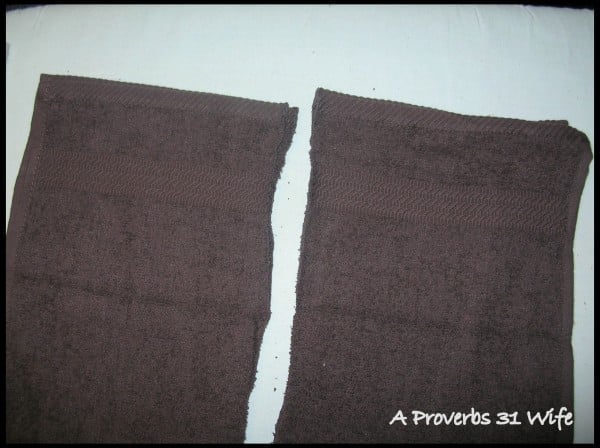 Next I cut the dark brown hand towel in half the long way. 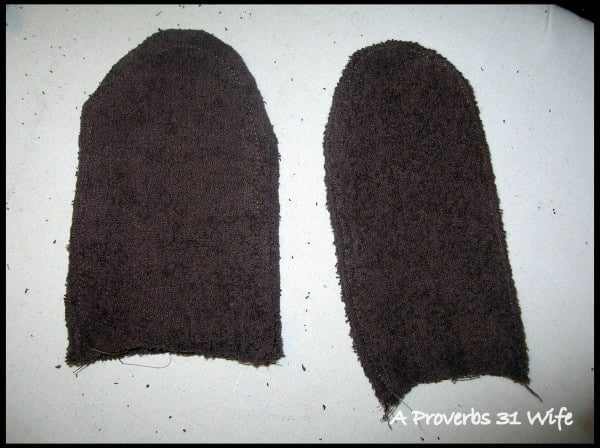 With one half of the hand towel I cut out 4 ears. I sewed 2 together, flipped it so the stitching was inside and top-stitched on the outside so the ears would lay flat. 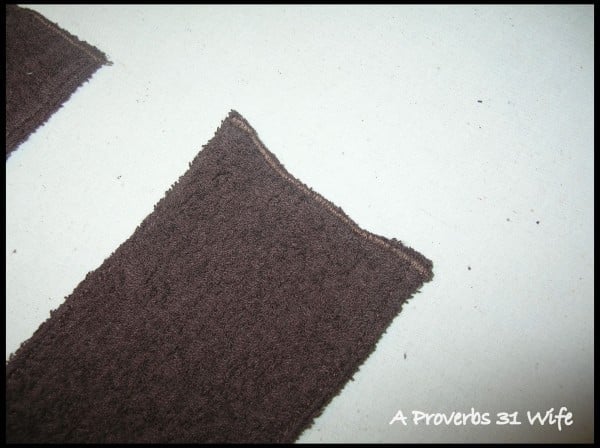 Then I zig-zag stitched the ends so they didn’t unravel. 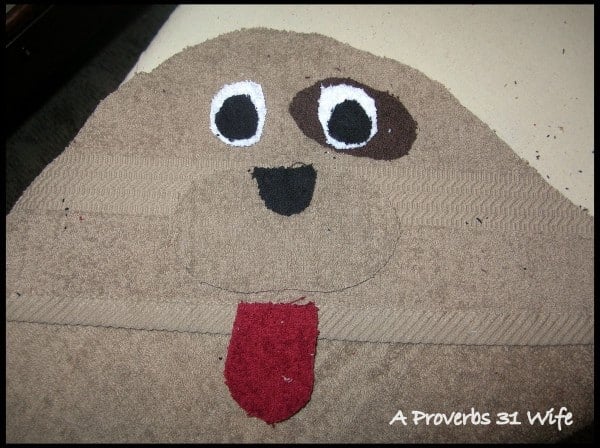 Next I cut up the wash cloths to make eyes, nose, spot and tongue. For the tongue I used 2 pieces and stitched it like I did the ears. 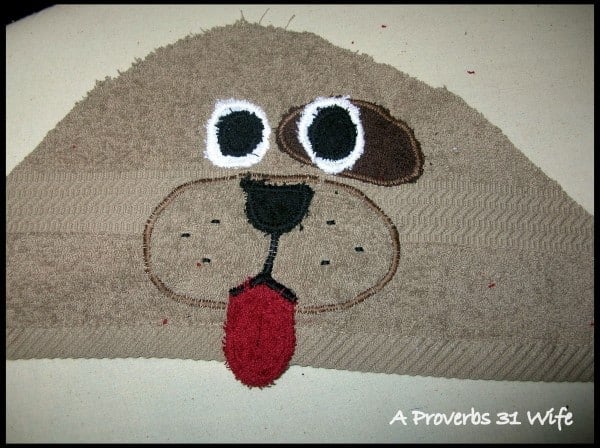 The next step was to sew all the pieces on. I used the zig-zag stitch again.  On the nose where the black thread comes down to the tongue, I used a black sharpie to make it all black so you couldn’t see color peeping out. 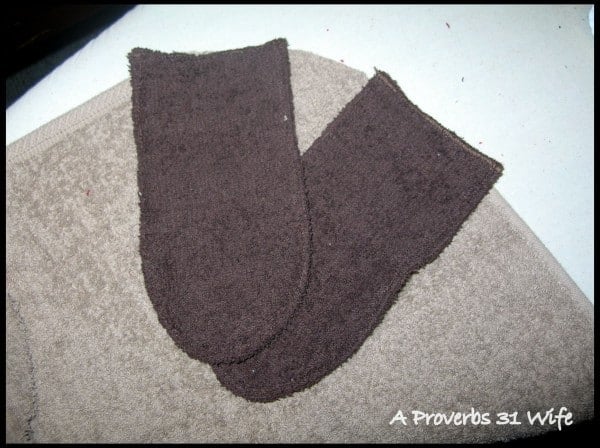 At the corner of the bath towel I pinned the ears. 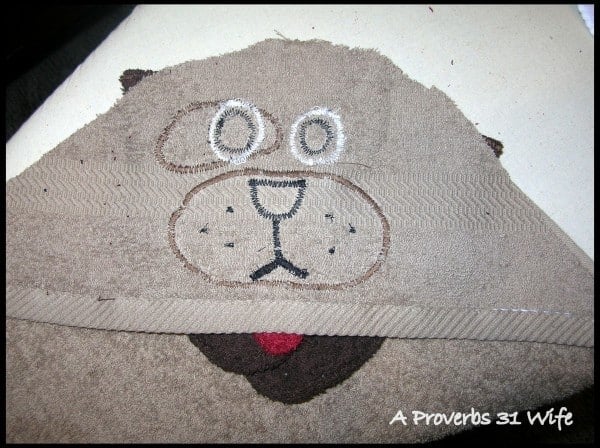 I put the puppy face, face-down on the ears, pinned and stitched it. 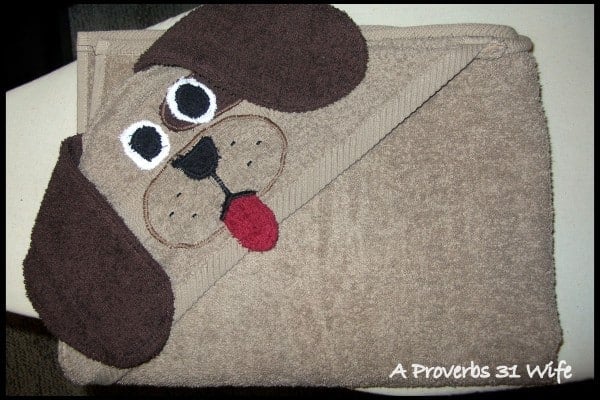 Turned and top-stitched, here is the result for baby. Is it cute or is it CUTE???  *insert wild happy dance!*

Time to start on big brothers hooded towel. This one was a little more tricky. 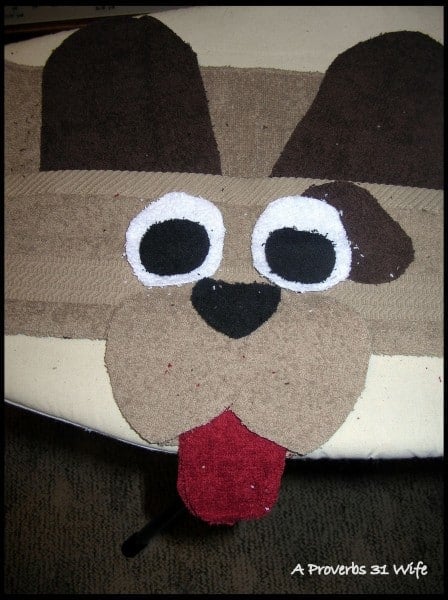 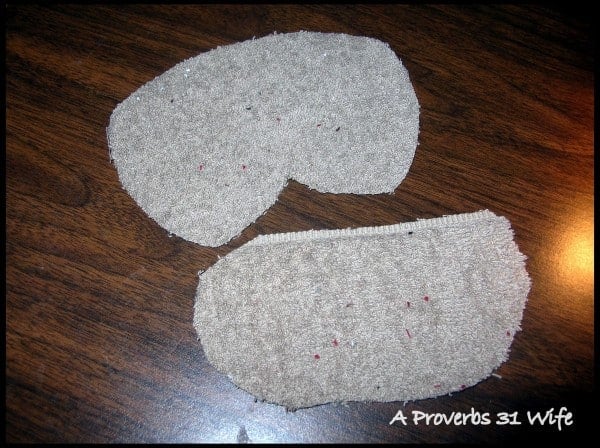 Because the nose part hangs off the front I cut two pieces for it. 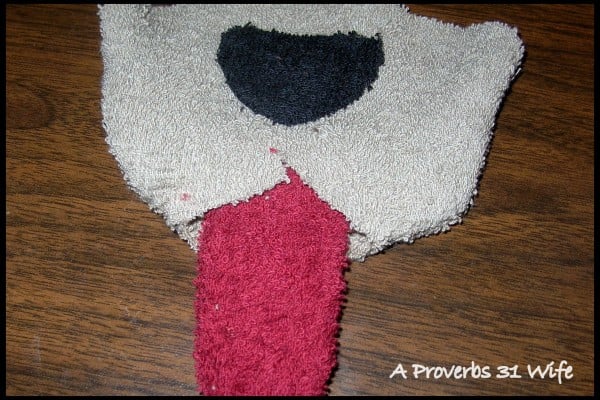 Here the 2 pieces are stitched together and the tongue (done just like the tongue and ears for baby) is suck in the hole and I set the black nose on top. 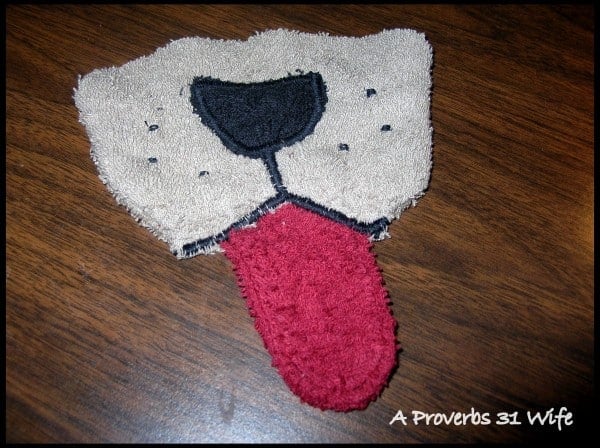 Here it is after I stitched it all together. 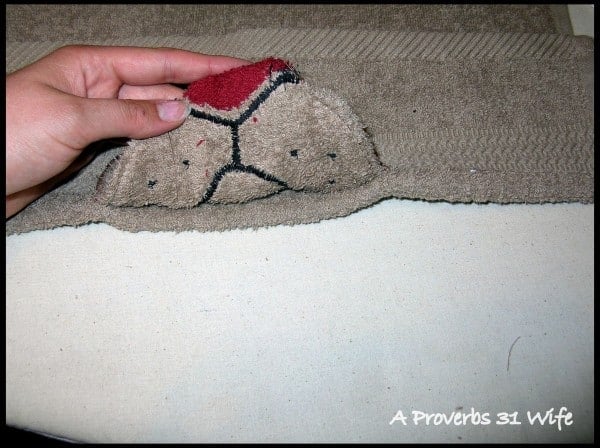 The next step was to pin and stitch it to the hood part. I left half of it hanging off as shown here. 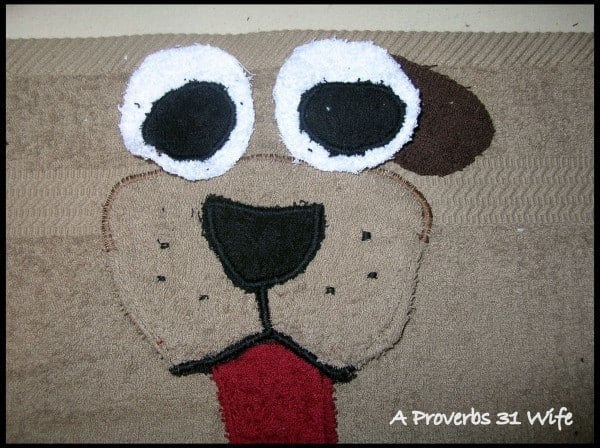 Next step was to zig-zag stitch the spot and eyes down. You can also see, how I again used a sharpie to blacken the color showing up in the black stitching. 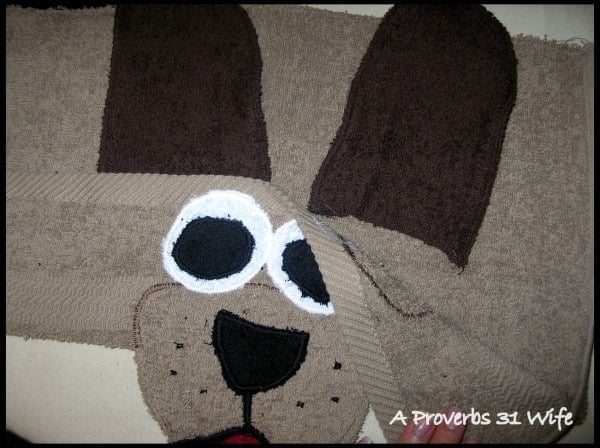 I folded the towel back like I had it at first,  pinned the ears in and top stitched it. 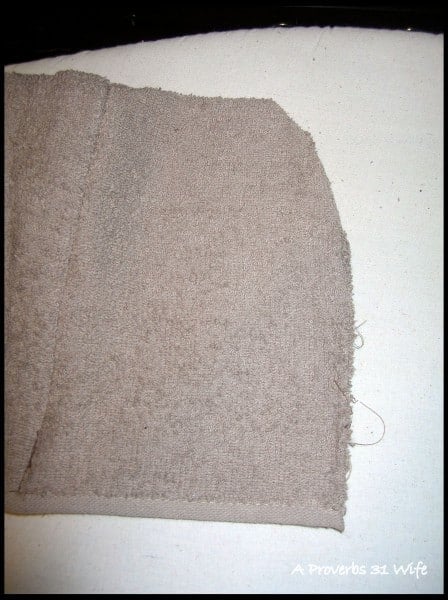 Next I folded the hood inside out, rounded the top a little and zig-zag stitched it together. 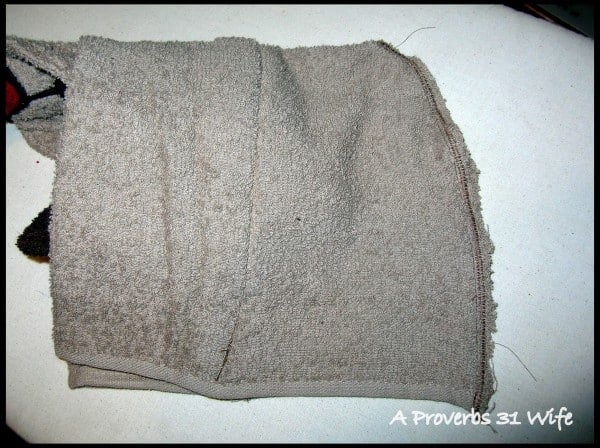 Here is the stitched result. 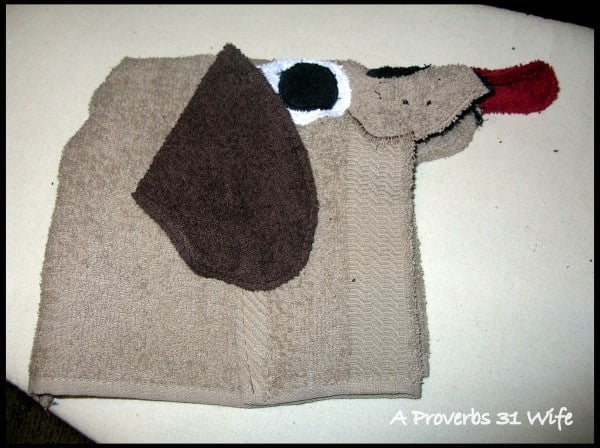 Here is the finished hood. Now to put it on the towel. 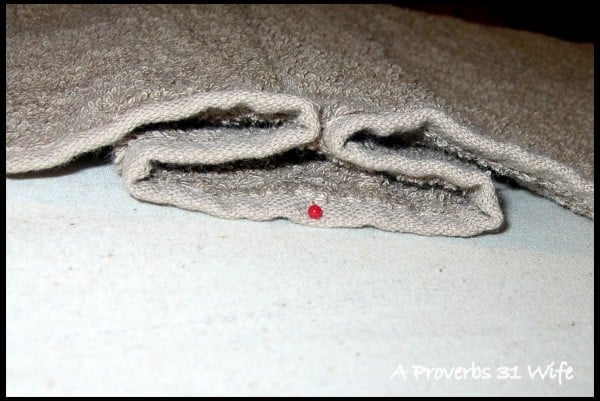 I wanted a pleat in the towel so I used a pin to mark the center of the top of the towel and made one pleat. 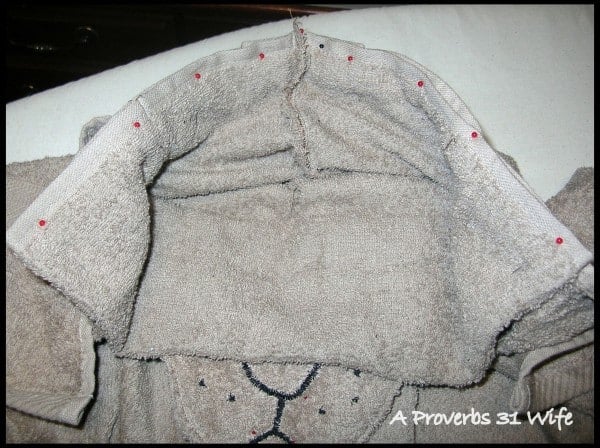 I then pinned the hood, face down on the towel. Lining the seam in the back of the hood to the pin I used to mark the center of the towel. Then I sewed it together. 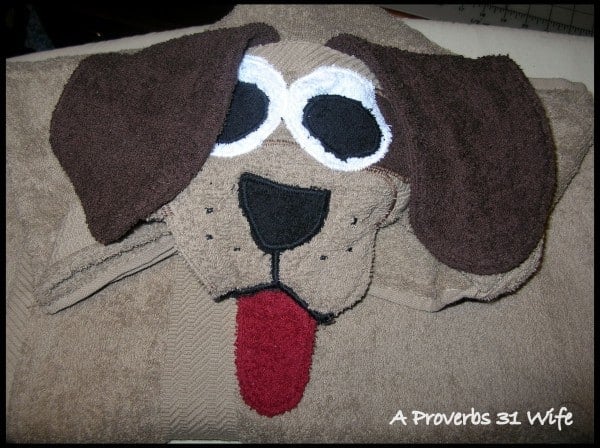 So here is big brother’s towel. I don’t think it turned out quite as cute as the first one though. 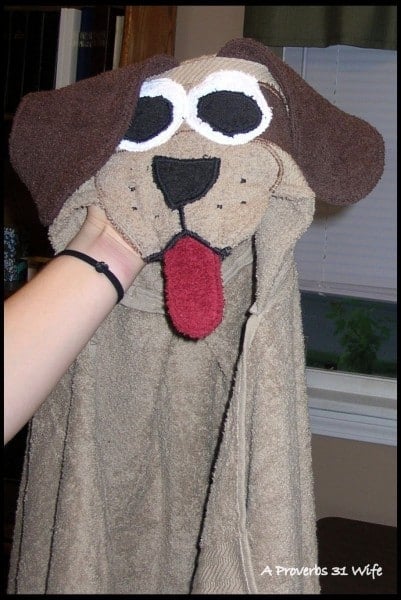 Another picture of big brothers towel.

All told, I am very happy with how they turned out. For a girl who doesn’t necessarily “love” to sew I am very pleased!

And hopefully I didn’t completely bore you with all the pictures. 🙂

Sharing at Earning My Cape